Tweet
South Bronx Residents File Suit to Stop FreshDirect’s Move
Seek Comprehensive Analysis of FreshDirect’s Affect on Health, Environmental and Quality of Life
Bronx, NY, June 13, 2012 – Residents and community organizations from the South Bronx filed suit today at Bronx Supreme Court aiming to halt FreshDirect’s move to public waterfront land at the Harlem River Yards in the South Bronx, a relocation that would use $130M of public money.
The lawsuit seeks to compel defendants to conduct a comprehensive analysis of how FreshDirect’s move would adversely affect the environmental health and quality of life of South Bronx residents, as is required by law. The move would, among other things, add thousands of diesel truck and car trips every day to a community that is already over-polluted and that has very high rates of asthma and other negative health conditions associated with exposure to pollution.
In addition, the plot of land FreshDirect wants to occupy is across the street from a 420-unit apartment complex and adjacent to hundreds of additional residential units and small businesses, developed in response to successful rezoning efforts over the last fifteen years.
The cumulative effects of the proposed FreshDirect move would be devastating. The Harlem River Yards already house a 5,000 ton-per-day waste transfer station, as well as enormous hubs for FedEx and the New York Post, and a fossil fuel power plant. This despite the fact that the land is owned by the State and as such, supposed to be used to the benefit of the public.
“We are not New York’s dumping ground,” said resident Mychal Johnson, who serves on Community Board 1. “Our asthma rates are at five times the national average. We need jobs, but we also need to breathe.”
Defendants, including New York City Industrial Development Agency, New York City Economic Development Corporation, New York State Department of Transportation, Empire State Development Corporation, Harlem River Yard Ventures, UTF Trucking, and FreshDirect, failed to hold a public hearing before announcing the move and failed to discuss the proposed 500,000 square-foot project with the local Community Board.
“Enough is enough,” said Harry Bubbins, Director of Friends of Brook Park, “we have too much pollution here. We need what other communities have: green space, waterfront access, mixed use development with affordable housing, local commercial enterprises, and green jobs.”
South Bronx residents and community organizations, including La Peña del Bronx, Pueblo en Marcha, Friends of Brook Park, and South Bronx Unite, have joined together to file this lawsuit with representation from New York Lawyers for the Public Interest and pro bono co-counsel Schindler, Cohen & Hochman, LLP.
“The Fresh Direct project has been improperly forced upon the South Bronx.  The City excluded the community from its decision-making processes and systematically understated the Project’s environmental impacts in an effort to avoid public scrutiny of the harms this project will create,” said Christina Giorgio, attorney, New York Lawyers for the Public Interest. “This is unacceptable and irresponsible for a project that would add at least 3,000 cars and diesel trucks every day into a community already plagued by asthma and high pollution.”
“None of those involved with this plan live here,” said resident Monxo Lopez, “our neighborhood is energized and taking charge of its own development and destiny.”
In addition to the lawsuit, City Council Member Mark-Viverito, City Council Member Arroyo, State Senator Serrano and U.S. Congressman Serrano have joined local residents and called for a moratorium on all new development, including FreshDirect, until an analysis is undertaken of the current uses of the land on which FreshDirect proposes to move and the effects such uses have on the community.
###
About New York Lawyers for the Public Interest
New York Lawyers for the Public Interest (NYLPI) advances equality and civil rights, with a focus on health justice, disability rights and environmental justice, through the power of community lawyering and partnerships with the private bar. Through community lawyering, NYLPI puts its legal, policy and community organizing expertise at the service of New York City communities and individuals. NYLPI’s partnership with the private bar strengthens its advocacy and connects community groups and nonprofits with critical legal assistance. NYLPI is the recipient of the 2010 New York Times Awards for Nonprofit Excellence.
About South Bronx Unite
South Bronx Unite is a coalition of South Bronx residents, organizations, and allies.

Our stickers are in, swing by to pick one up and help spread the word.
Tonight, Wednesday 4.11.12
96th Street and Broadway!430 pm till 6pm (or later)
We’ll be the ones with the superman costume, trumpet, drums and STICKERS!
for more info you can email us at southbronxunite@gmail.com
Tweet 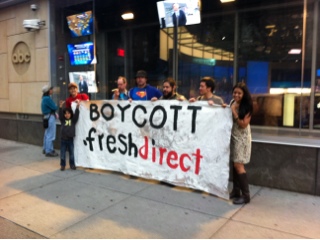 Tweet
Tweet
Be on the right side of this!FreshDirect plans to use $130 million in subsidies to occupy public waterfront land in the South Bronx, imposing 2,000 daily vehicle trips through a community already facing asthma rates five times the national average. This company is a parasite on the public: they use public dollars to aggravate public streets with noise, exhaust, and waste.
Sign up here to Boycott FreshDirect
and then spread the word!
Fresh?
Desecration
Pollution
Exploitation
New Yorkers deserve better,
especially when virtually every rent-paying local grocery store will deliver!

Tweet
FreshDirect does not belong in the South Bronx

First, FreshDirect would not bring a single guarantied job to the South Bronx. Despite what elected officials have said, the $127.8 million in public funds awarded to FreshDirect carries no mandate that they add any jobs or hire a single person from the South Bronx, a fact reaffirmed by the non-binding agreement between FreshDirect and Bronx Borough President Ruben Diaz.
Additionally, FreshDirect has a well-documented history of unfair labor practices and would be exempt from city living wage requirements.

Second, FreshDirect would exacerbate asthma rates among a community already facing asthma hospitalizations at five times the national average. FreshDirect would add upwards of 2,000 diesel truck trips per day through a residential neighborhood. The same public land set to house FreshDirect already holds a FedEx hub making over 1,400 daily truck trips through the neighborhood, the New York Post printing and distribution center, and a 5000 ton per day waste transfer station, one of four waste transfer stations within a 1/8 mile radius of the proposed site.

Third, FreshDirect plans to build on land documented to be a Native American burial ground and settlement. The owner of this historically significant site, New York State Department of Transportation (DOT), acknowledges that artifacts of the Ranachqua Village and burial ground may be present.

Fourth, DOT’s twenty-one year-old agreement with a private developer is outdated and harming residents. The 1991 lease to Harlem River Yard Ventures (HRYV) was designed to “reduce congestion from truck traffic” by developing the rail system. While HRYV failed to follow through on this, surrounding areas have drastically changed: land bordering the site has been rezoned for residential use, significant residential development has taken place, and the area has been included in the New York City Comprehensive Waterfront Plan. Despite local development and city planning, however, HRYV continues to sublease to companies that block public access to the waterfront and cause egregious levels of air, water, land, and noise pollution. The City, State, Borough and Fresh Direct all ignored these facts when crafting the proposed move to the South Bronx.

Fifth, FreshDirect will not provide food to the South Bronx. FreshDirect plans to use a handout from the Bronx to move to public land in the Bronx without providing any service to the
community they want to occupy.

Finally, architects of this deal ignored the democratic process and were not upfront with the public. Governor Cuomo, Mayor Bloomberg, and Borough President Diaz announced that the deal was done two days before the sole public hearing on the matter. In doing so, they publicly demonstrated that community input was not important. Additionally, the New Jersey Economic Development Authority has refuted the notion that they made a competitive offer to support a FreshDirect move across the Hudson.

WHY:            Without public hearings or notification last Tuesday, city, state and Bronx officials announced a nearly $130 million subsidy package for Fresh Direct to leave its Queens facility and expand its operations at the Harlem River Yards in The Bronx. The proposed project would bring more heavy diesel truck traffic to our already high asthma-inflicted communities and, despite misrepresentations made to the media, fails to guarantee any new jobs, much less living wage jobs, for South Bronx residents. South Bronx residents demand equitable and environmentally sustainable economic development proposals that are developed democratically and that create jobs at a living wage.
For more information- www.southbronxunite.org

Protestors take to the web against FreshDirect