Part of the 6th annual Jane’s Walk NYC, organized by the Municipal Art Society, this public walk will take participants through the neighborhood of Mott Haven-Port Morris in the South Bronx, the heart of one of the most important fights against environmental racism (causing 1 in 4 kids to have asthma) and, now, against unprecedented real estate speculation (with 11 market rate residential developments and 6 hotels being given permits within the last year to begin construction.) Participants will walk through the community’s historic districts, commercial strips and contentious waterfront zone and learn about rich local arts and artists, community land trust initiatives, locally-designed waterfront plans and city policies that have disproportionately saturated the zone with fossil fuel power plants, waste transfer stations and diesel trucking operations, including FreshDirect. Participants will also travel the path of proposed market rate residential towers (where, to live there, would require a salary nearly seven times the local average median income), and they will learn about the community’s efforts at confronting hyper real estate speculation that threatens mass displacement.

As representatives of the environmentally overburdened community, where the deadly outbreak of Legionnaires was recently linked to the community’s chronic respiratory and other illnesses, the councilwomen asked for an extension to the public comment period and a public hearing on the re-permitting.

“…no evidence has been presented to our offices that the closure of this plant would have any impact on the price or availability of electricity in the City or have any other impact other than the elimination of a source of air pollution from a severely overburdened neighborhood,” the letter stated.

Located on State land privately leased by then Governor Mario Cuomo, the NYPA facility was pushed through as a temporary facility 15 years ago and bypassed environmental review at the time on the basis that it generated 79.9 MW, 0.1 MW shy of the trigger for a comprehensive impact analysis. The power plant sits within an approximate half mile of five other facilities also requiring air pollution permits and in close proximity to traffic-heavy highways and NYCHA and other residential buildings.

“This is the cycle in environmental justice communities of color,” said Mychal Johnson, co-founder of South Bronx Unite, a local environmental and economic justice organization, and board member of the Bronx Council for Environmental Quality. “How can we keep allowing projects to be sited and permitted without evaluating the harm? If we have a health crisis in the South Bronx because of such projects, why isn’t there a higher level of scrutiny?”

More than 200 residents and other environmental leaders wrote letters to DEC urging rejection of the permit.

Concerns and questions raised include the necessity of the facility, the adequacy of the siting process, the lack of pre-construction environmental review and the risk of exceeding permitted emission limits, including during start up and shut down. Organizations have also asked to review compliance reports, mitigation plans and PM 2.5 measurements, among other requests.

“DEC has a policy mandating enhanced public participation in environmental justice communities,” said Harry Bubbins, Director of Friends of Brook Park. “We hope they will not close the door to engagement before giving us the information to formulate meaningful questions.”

While DEC originally closed the public comment period last Friday, September 4, they have now extended it to September 18. South Bronx Unite is encouraging people to continue contacting DEC in regard to this matter.

Our friends at Welcome2TheBronx covered the story here. –

Tweet
Below is an open letter to Ruben Diaz Jr. that Ed Garcia from welcome2melrose wrote.  03/ 2012 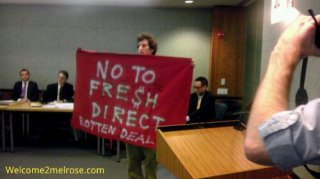 Last week Bronx residents, including myself, were caught off guard by the announcement in the New York Daily News that “Fresh Direct will receive $130 million in grants, tax breaks and tax credits from the Cuomo and Bloomberg administrations and Borough President Ruben Diaz Jr.” Why were we so surprised? Simply put, we were left out of the process regarding the future of our public lands (almost 100 acres on the waterfront) and $130 million of our tax dollars.  I would like to ask you why, Mr Diaz, was this done so sneakily behind our backs? Why weren’t we part of the process as is our right? Sadly, had this been 100 acres in Manhattan, Brooklyn or any other borough we would not be having these issues because it would NEVER have been done behind the residents’ back.

You recently called the opposition out (which includes myself) on your personal page on Facebook as well as the group created by your office, “Bronxites for FreshDirect“, and asked us ”To those people who continue to say that they don’t want Fresh Direct here, my question to them is, ‘do we say no to the potential of 3,000 jobs?’”–Borough President Ruben Diaz Jr.”  That is a poor and cheap tactic pandering to the heartstrings of Bronxites who already suffer from the highest employment rate in the city.  What potential of 3,000 jobs?  There are already almost 2,000 employed at FreshDirect and the estimates are that 1,000 jobs will be created by 2020.  That’s pretty far into the future when Bronxites need jobs NOW.  Not 8 years from now.  The first of the jobs wouldn’t even begin until 2015.  Again, that is 3 years away and 3 years too late for people who need jobs right this minute.

But it doesn’t just end there.  We also need QUALITY jobs.  You have been quite an outspoken proponent of living wage jobs for Bronx residents and even wrote an editorial for the New York Daily News.  Remember that?  I’ve taken the liberty of highlighting and boldface type the pertinent quotes from your eloquent letter as a fighter for fair wages for Bronxites.

What the Kingsbridge Armory needs for a successful redevelopment is a considerable public-private funding partnership, similar to those at the High Line and other city armories. The High Line got more than $100 million in taxpayer support; that kind of investment could surely help lift up my borough.

In December 2009, the City Council voted to prevent the development of a retail mall at the Kingsbridge Armory, a former military outpost with a footprint larger than two football fields, near Fordham Road. I supported that decision because the developer didn’t ensure that employees would’ve been paid a living wage.

I have approached the discussion on the future use of the armory with only one aim: to expand access to opportunity and upward mobility through a responsible, community-focused investment and development strategy that yields a much higher rate of return for the taxpayer dollar. My critics have stated that my work to defeat the proposed retail mall was irresponsible, but I know we made the right decision.

A mall would have devastated local businesses – at taxpayer expense. And we cannot say that the project would have created the number of jobs promised, anyway.

When the Related Companies constructed the Gateway Center Mall near Yankee Stadium in 2005, executives promised that the mall would employ more than 2,300 full-time workers. As of last year, the mall has created the equivalent of just 986 full-time jobs, less than half of what was proposed. We cannot accept at face value the claim that Related would have created 1,200 new retail jobs at Kingsbridge, given its disappointing track record.

The Gateway Mall is the hallmark of Mayor Bloomberg’s approach to job creation: provide developers with city land and/or public assets at deep discounts, then subsidize site conversions with millions of taxpayer dollars in cheap financing, tax breaks and far-below-market rents in order to create poverty level jobs.

The growth of the local retail industry is a driving force for these jobs. More low-wage workers in New York City are employed in retail than in any other sector of the economy. Three in five retail workers earn an hourly wage of $13 or less and 44% earn less than $10 an hour. The prevalence of low-wage jobs and the retail sector’s fast growth, make these projects poor candidates for public subsidy.

What we need is redevelopment that would not just awaken the empty hull of the armory but also create new business and social activity throughout the neighborhood. The space could be used for a sports arena, a recreation facility, a film studio or a number of other options. With the help of City Hall, we will solicit proposals that meet those requirements.

Such redevelopment will likely require a significant public-private partnership, especially given the poor shape of the building and the inability of most interested parties to finance such a large undertaking.

Other armories in the city – Park Slope, Fort Washington Ave. and Park Ave. – have seen significant taxpayer investment in their redevelopment in addition to private fund-raising. Rather than becoming malls in competition with neighborhood merchants, these armories were developed with recreational use in mind. Each has become a cornerstone of its community.

It is inconsistent to presume that a public-private partnership would be unfeasible for the armory, given the extent of public dollars invested in relatively smaller projects around the city.

The city should look at its success at the High Line, which has become a major amenity to the West Side of Manhattan largely due to considerable public investment and replicate that model at the armory, emphasizing the redevelopment of the surrounding neighborhood over direct job creation.

Taken as its own entity, the High Line has created a mere handful of jobs – not enough to justify more than $130 million in taxpayer investment in a small strip of parkland. At such spending levels, one has to wonder what, if any, was the city’s direct return on its investment.

There is no reason that a similar model could not be implemented at the Kingsbridge Armory. I am ready to work with Mayor Bloomberg to put forward a new request for proposals, one that not only focuses on the need for community-minded redevelopment but also does not shy away from significant public investment. If such investment is appropriate for the High Line, then it is appropriate for the Bronx.

Diaz is the borough president of the Bronx.

So after reading the beautiful letter which you wrote I ask you, what is so different from the FreshDirect deal that is so deserving of our $130 million in grants and tax subsidies?  These jobs, that you are touting as if we should be grateful, are jobs that are barely above minimum wage. 38% of FreshDirect employees make less than $25,000 a year which is far below what is necessary for a single parent with one child to survive in the Bronx.  What of our waterfront? Is it not worthy of protection as Manhattan’s waterfront or any other borough? As you know from personal experience in the Bronx as you stated in the above editorial, promised jobs are just that:  Promises.

We all know too well that as the old adage goes, promises are made to be broken.