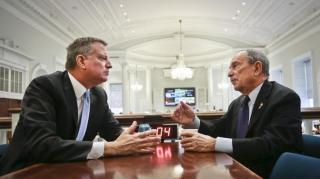 On July 14th 2014, South Bronx Unite sent out an action alert to our email list.  In it we encouraged our members and allies to contact Mayor de Blasio, and ask him to put an end to the Bloomberg-era Tale of Two Cities FreshDirect deal that he campaigned against during his mayoral run.

It has been over one month and Mayor de Blasio has not yet responded to over 250 calls/emails asking him to stop the proposed $137M subsidy of 1,000+ daily diesel trucks trips
through South Bronx Asthma Alley. Instead, his office announced the monumental redesign of downtown Brooklyn – to include a 21 acre greenway connecting downtown to the Brooklyn waterfront.The Tale of Two Cities will not change until we insist it changes.  If you have not yet contacted the Mayor, please do so today.  If you have not yet received a response, please call and email again (and ask 5 friends to do so as well.)
*   *  *
Action Alert to Mayor de Blasio – End Tale of Two Cities FreshDirect Bad Deal!
For two and a half years, together we prevented (then) Mayor Bloomberg and Governor Cuomo from giving FreshDirect a single dollar of a (then) promised $127 million subsidy to move its trucking
operation to a South Bronx waterfront flood zone, bringing 1,000 daily diesel truck trips through an overburdened community already plagued with asthma rates 8 times the national average.  In 2013, we voted a progressive administration into office to change the tale of two cities and reverse course on decades of double standards and hazardous dumping on the South Bronx.
We have patiently waited more than six months for our newly elected leaders to deliver on their campaign promises, but our community’s health can no longer afford to be a back burner issue.  So today, we are asking all of you and everyone you know to call, email, tweet and facebook the Mayor and tell him to stop the FreshDirect deal.  Ask him to back his campaign for change with
action!
Tweet